Areas and Localities in Shahjahanpur 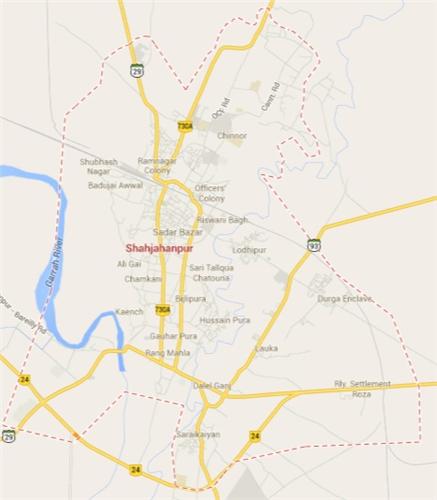 Sadar Bazar, in the heart of Shahjahanpur, is one of the prime localities of the city as it operates many business centres, government agencies, shopping centres and eateries. The NH 730A marks the right boundary and the UP SH 29 along with Kacheri Flyover marks the left boundary of the locality.

Chinnor and Ali Gai in Shahjahanpur

The Chinnor locality comes under the North of the Shahjahanpur city and it is one of the major localities in Shahjahanpur as it grounds the Ordnance Clothing factory, Post office and the Cantt area. The important areas in Chinnor are Cantt area, double storey and Mau Khalsa. The major roads in this localities are NH 730A, Cantt road, OCF road, post office road, GF college road and Ram lila ground road. Chinnor also shares its boundary with Khannaut River. The Ali Gai locality on NH 730A is cited close to Garrah River. Shastri Nagar colony, Tajukhe, Mullakhel, Chamkani and Khalil Sharki are very important areas under Ali Gai.

The national highway 730A and the state highway 29 merge in Ramnagar colony of Shahjahanpur. The city bus depot and Hotel Paradise are also cited in Ramnagar colony. The major roads in this locality are Aiman Zai Jalal Nagar road, Nighohi road and Puayan road. The Officers colony locality adjacent to Ramnagar colony and Chinnor localities is very close to UP SH 29 and the roads Officers colony road, GF college road & Cantt road run through the locality. The Doordarshan tower is also located in Officers Colony locality of Shahjahanpur.

Other Localities in Shahjahanpur

Through the Sari Tallqua Chatouna locality the River Khannaut flows. The river also marks the boundary of Hussain Pura locality and the locality also grounds the Nandan Van garden. The Kaench locality is located on the banks of River Garrah and the area Anandpuram colony comes under it. The UP SH 93 runs through the Lauka Locality. Sadar Tehsil is located in Gauhar Pura. The UP SH 25 and UP SH 29 mark the right and left boundary of Garhar Pura and Ranh Mahla localities. The NH 730A and UP SH 93 run through the Dalel Ganj locality. Through the Saraikaiyan locality the UP SH 25 runs and its boundaries are marked by NH 730A in the top and NH 24 in the bottom. Mishripur is an area covered under Saraikaiyan locality.